Since the 1970s, “Introduction to typography” has been an iconic course for first-year design students at the Bezalel Academy of Arts and Design in Jerusalem. Through the years, the academy grew from 20 graphic design students per year to more than 120; the building moved (twice), and technology has changed multiple times. But the song remains the same, and so do the core values behind typography teaching in Israel.

Our story begins with an iconic A3 ring binder, Hebrew Typography: A catalog of Useful Letters, published by Bezalel Academy of Arts and Design in Jerusalem. It was created by Ilan Molcho in 1980 and used by design students in Israel for 40 years. Its informal name is “Bezalel Catalog,” and original copies can be found in second-hand bookstores.

In this type specimen catalog, each typeface was introduced by a character set whose letters are 30 mm tall and subsequent pages showing smaller sizes. It ends with sample paragraph settings. This video shows the original copy Yanek Iontef bought during his student days.

This catalog represented the first time that all classic Hebrew-script typefaces were collected in a single volume. It immediately became popular with design and advertising agencies, as well as typesetting providers. 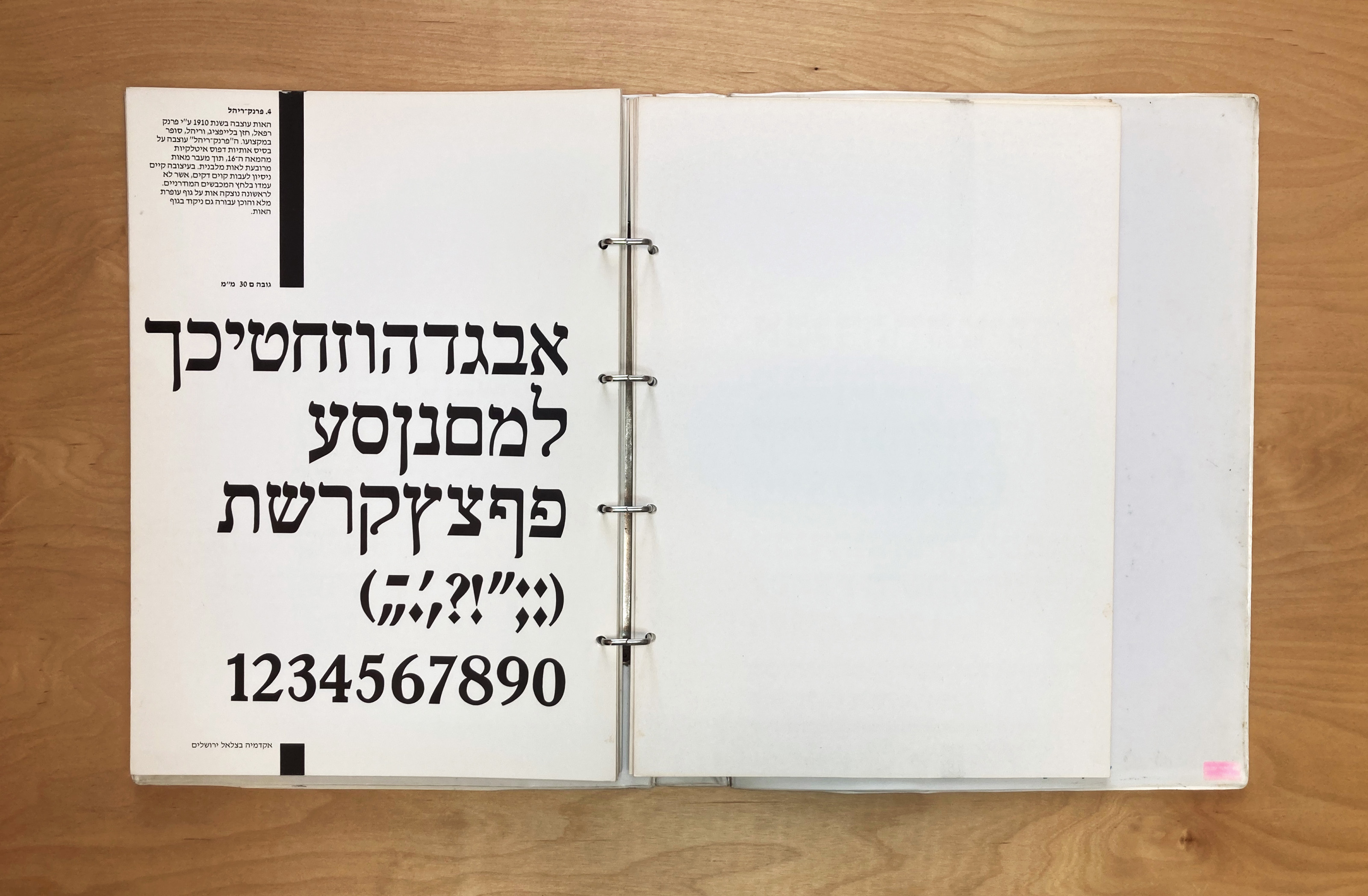 FrankRuhl (Raphael Frank, 1910) is the most popular Hebrew text typeface for use in all kinds of printed books, newspapers, and magazines. 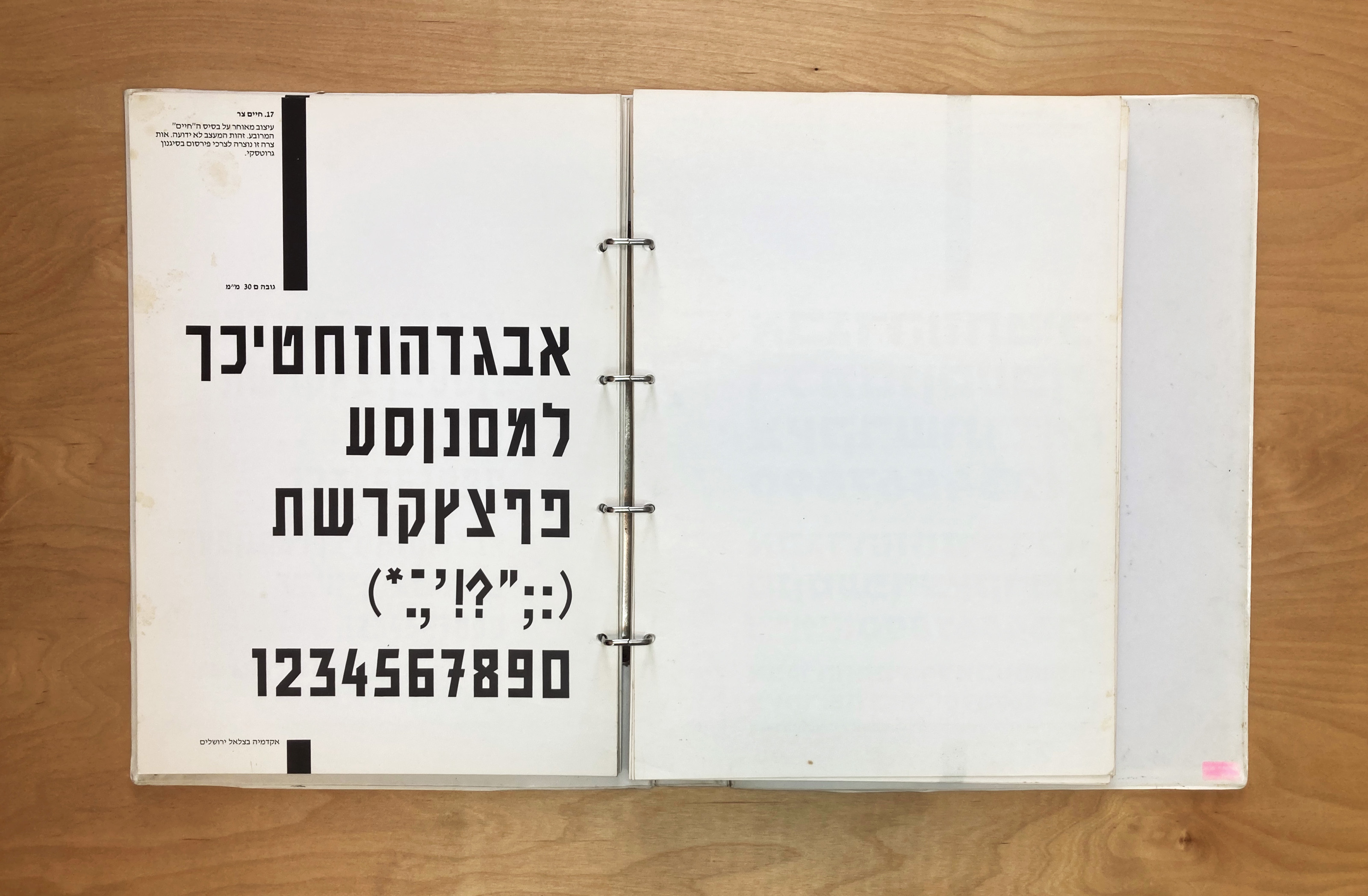 Haim Condensed (Jan Lewitt, 1936). This typeface is and always has been very popular for newspaper headlines. 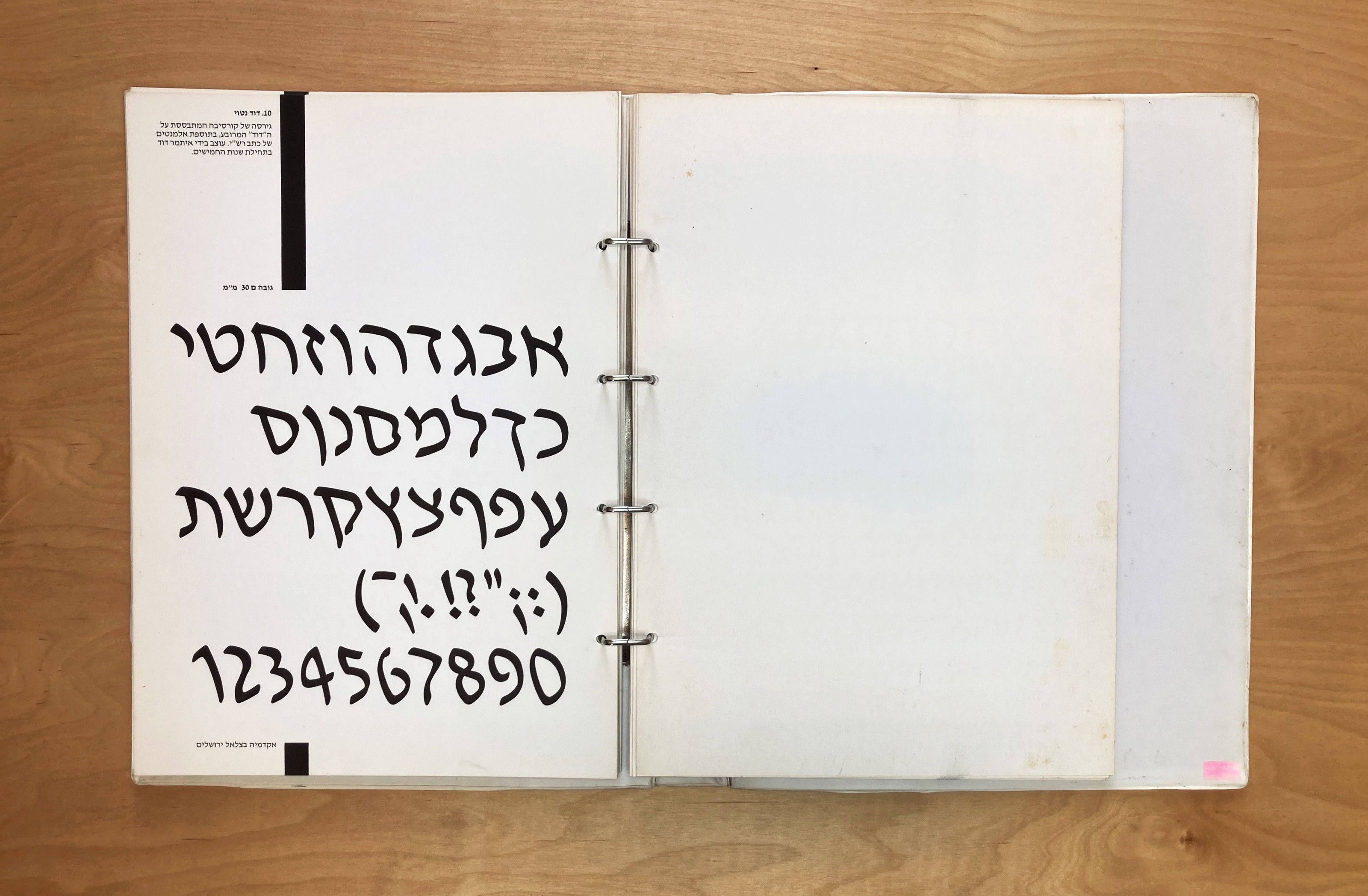 David Cursive (Itamar David, 1954). This very delicate typeface is one of the very rare attempts to design a Hebrew secondary style. 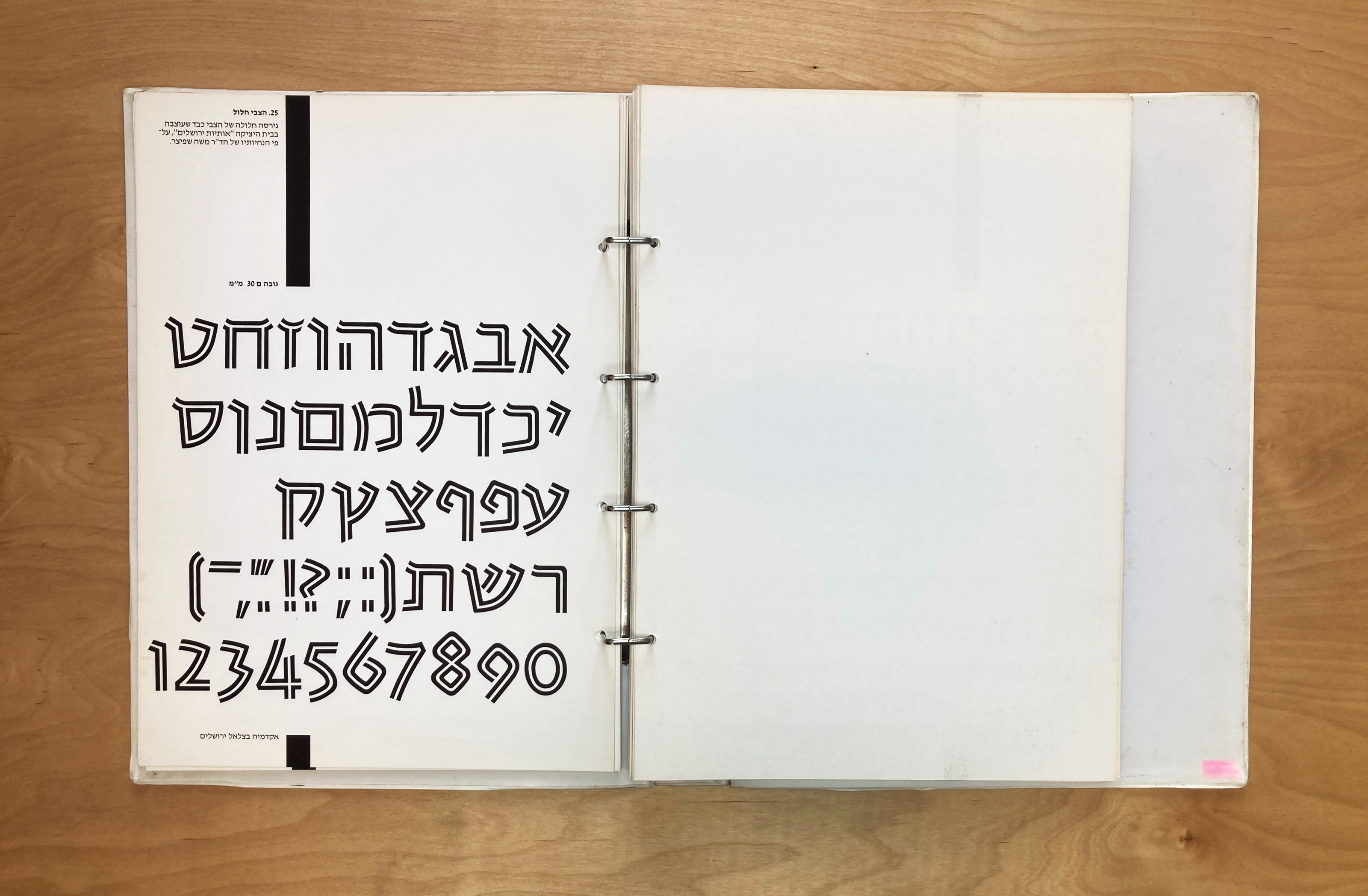 Hatzvi Hollow (Zvi Hausman, 1958). This inline style is one of the earliest Hebrew decorative display typefaces. 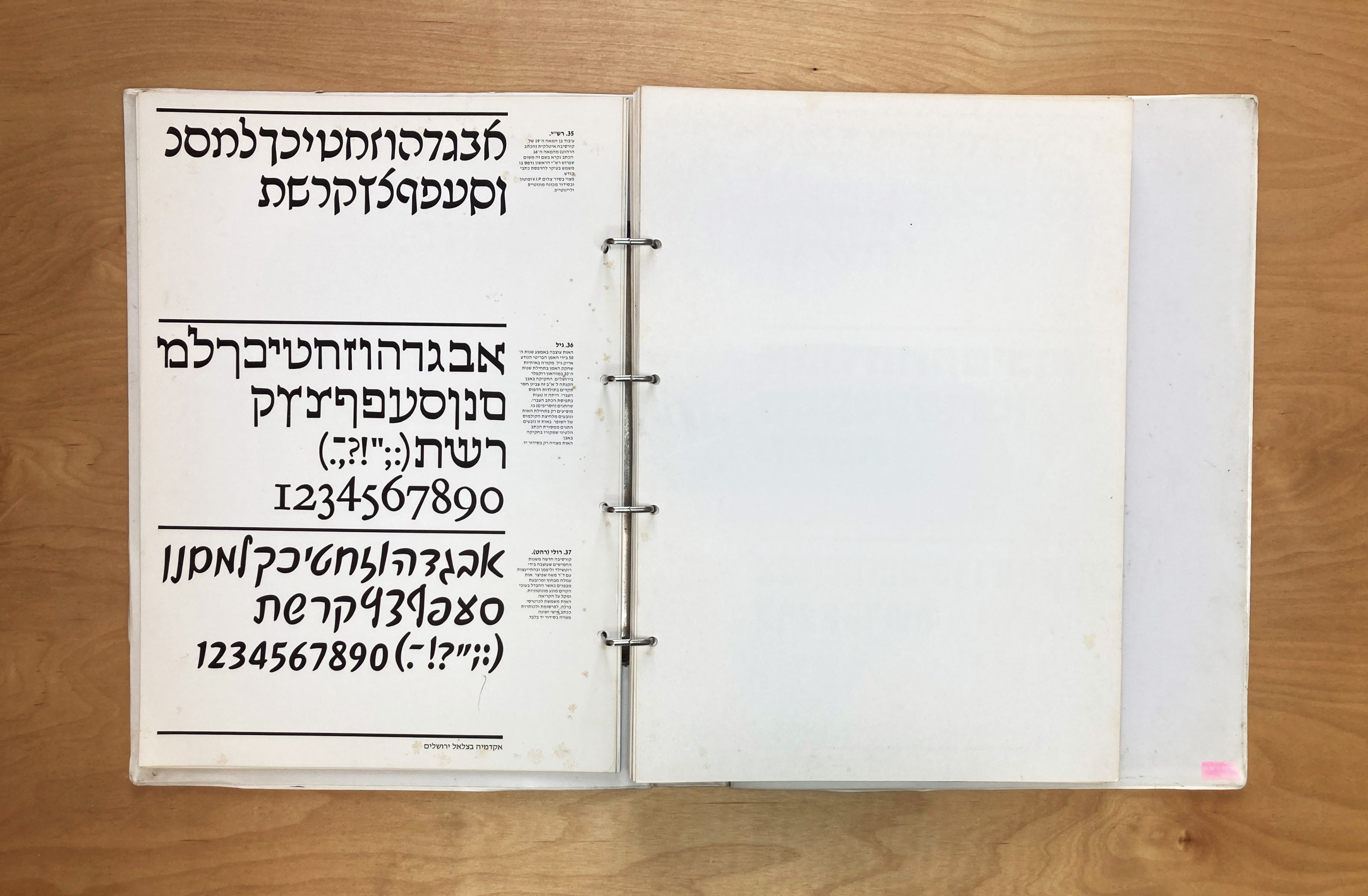 The catalog’s final pages display some forgotten models. “Rashi” (top) is a secondary style used in the Bible for commentary; Gill (middle) is a typeface designed by Eric Gill that suggested a unique way to add serifs to Hebrew; and Rolly (bottom) is a more playful handwritten script.

Ilan Molcho – The Creator of the Catalog

This type specimen catalog was created by Ilan Molcho and published in 1980. When it was released, it was so popular that the national news even covered it on television. Unlike what the rumors say, the catalog was NOT Molcho’s graduation project, but a project he started in his third year (out of four) and completed two years later, after he graduated.

The entire catalog was made by hand, using wood and metal types collected from different printers. Letters were set, printed, scaled, and retouched by hand, using white gouache and rapidograph pens. 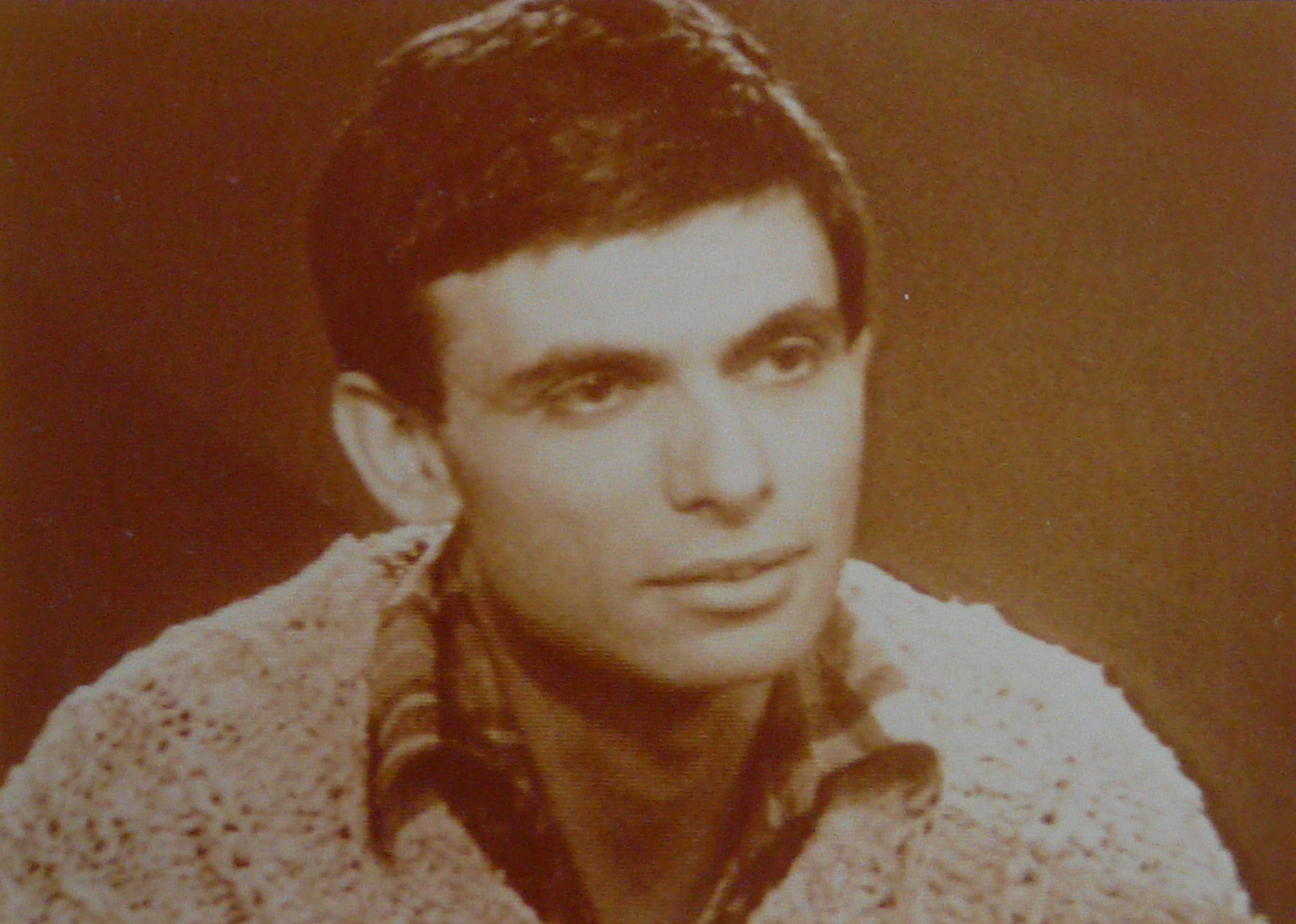 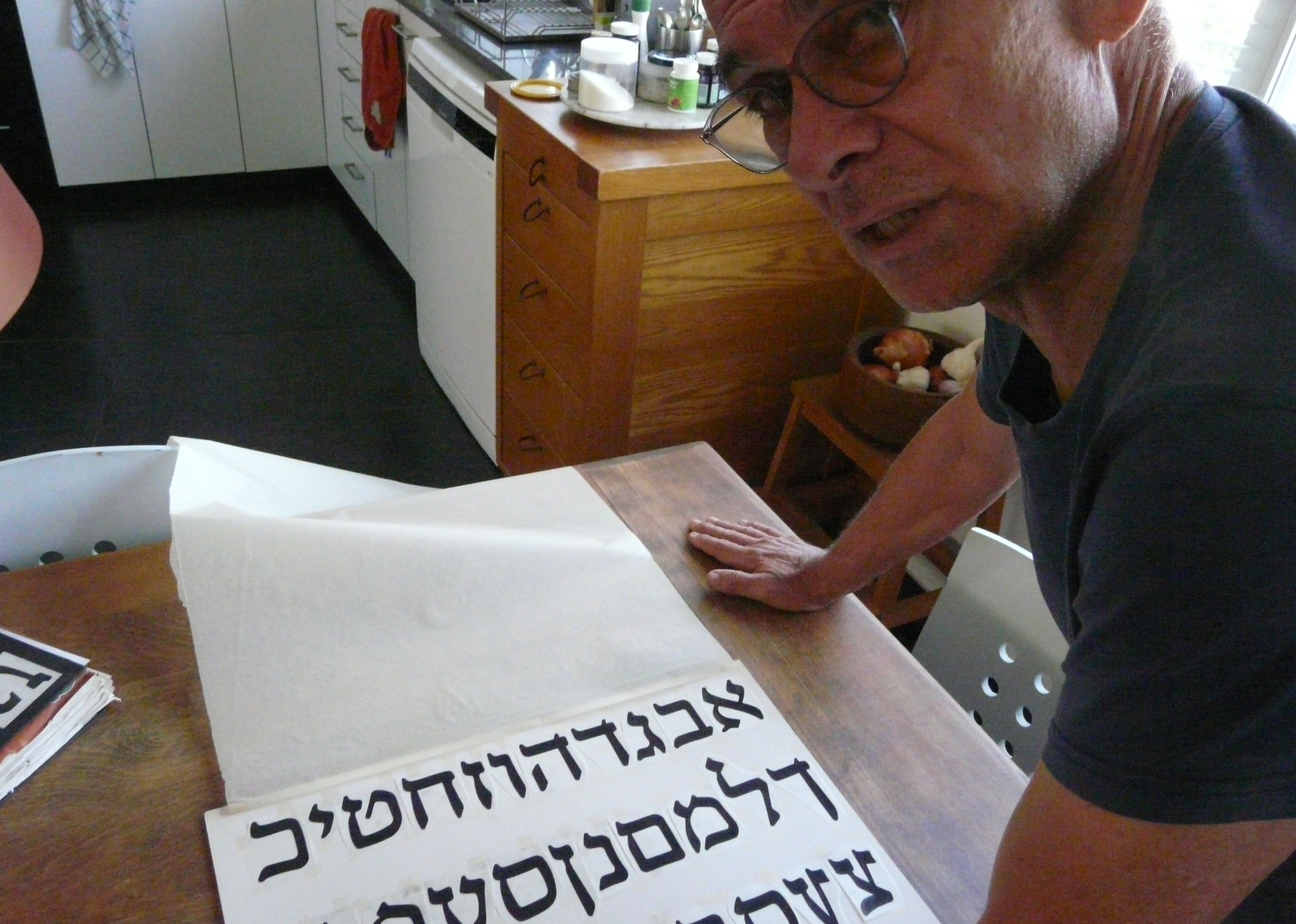 Before coming to the Fontstand Conference, my colleague Yanek Iontef met with Ilan Molcho to learn more about his catalog. 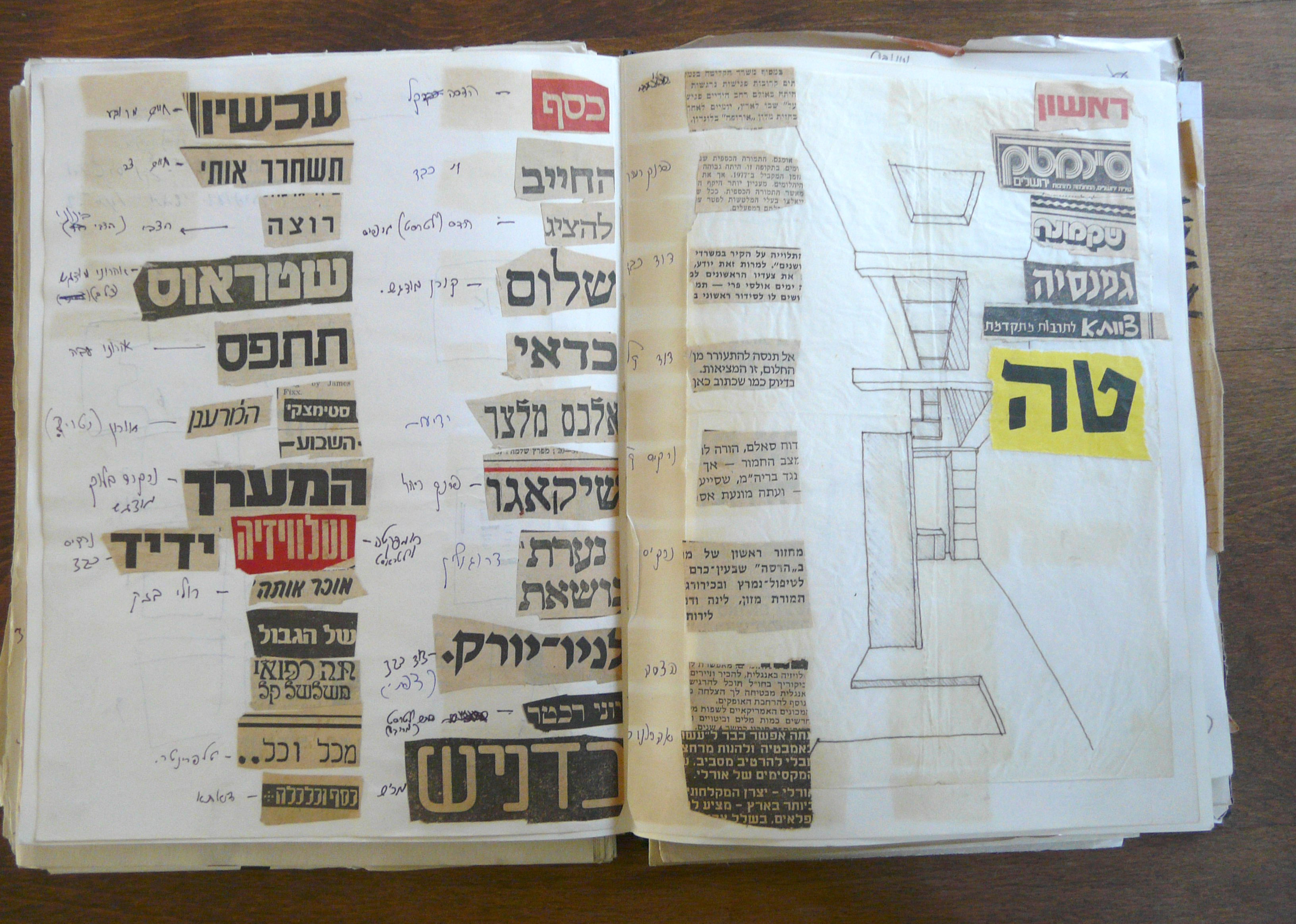 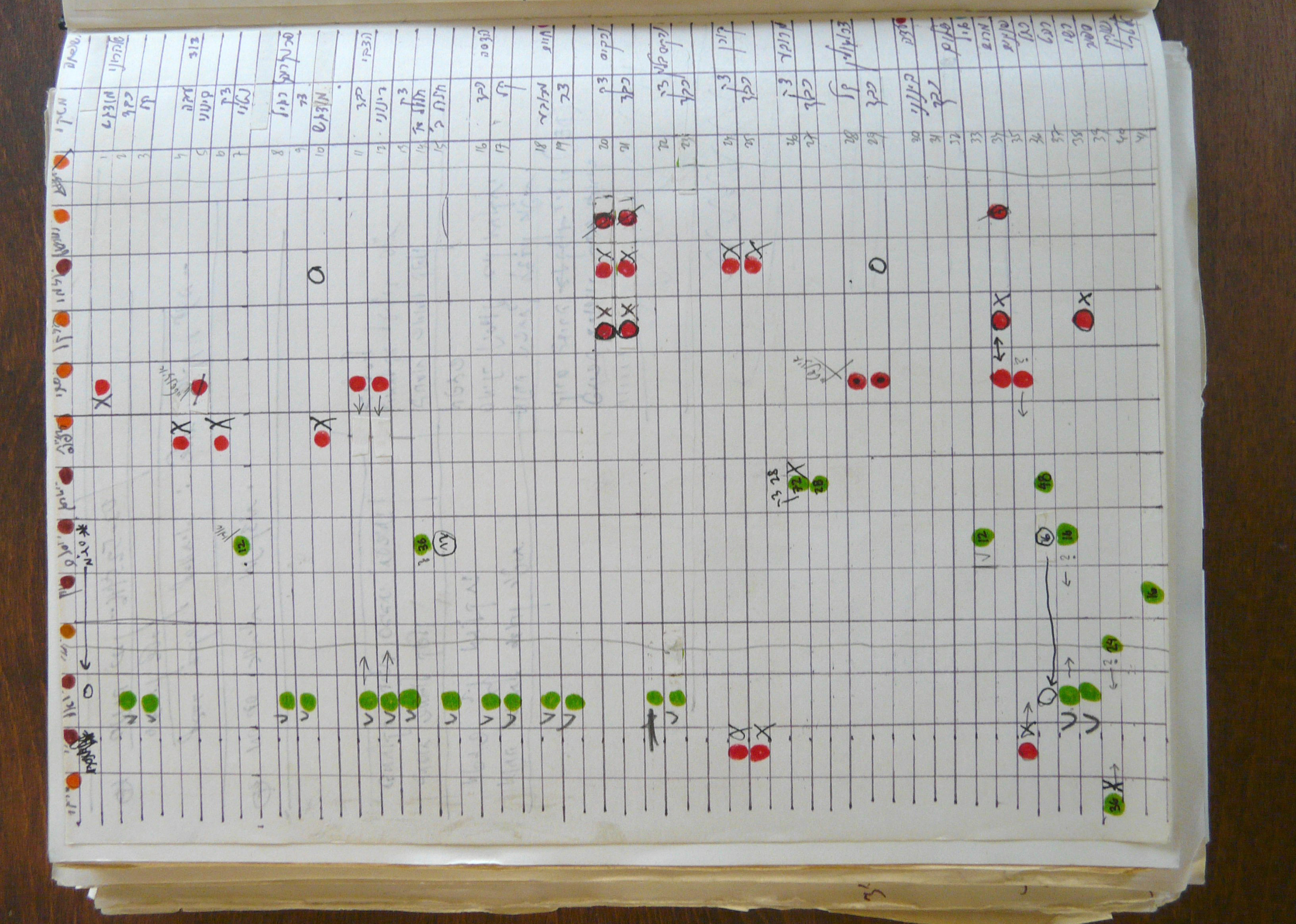 In his notebook, Ilan Molcho tabulated the printers that had each typeface. 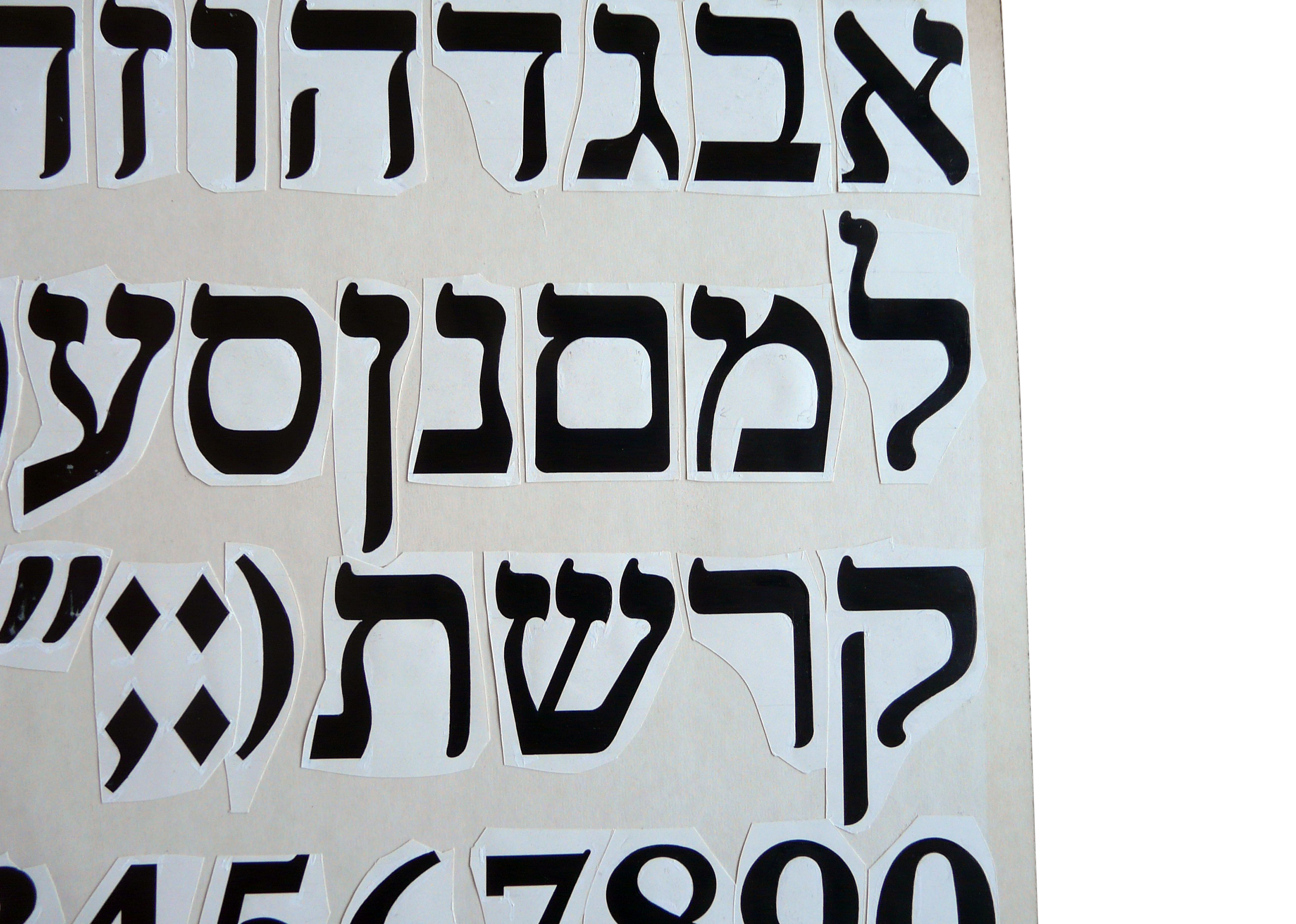 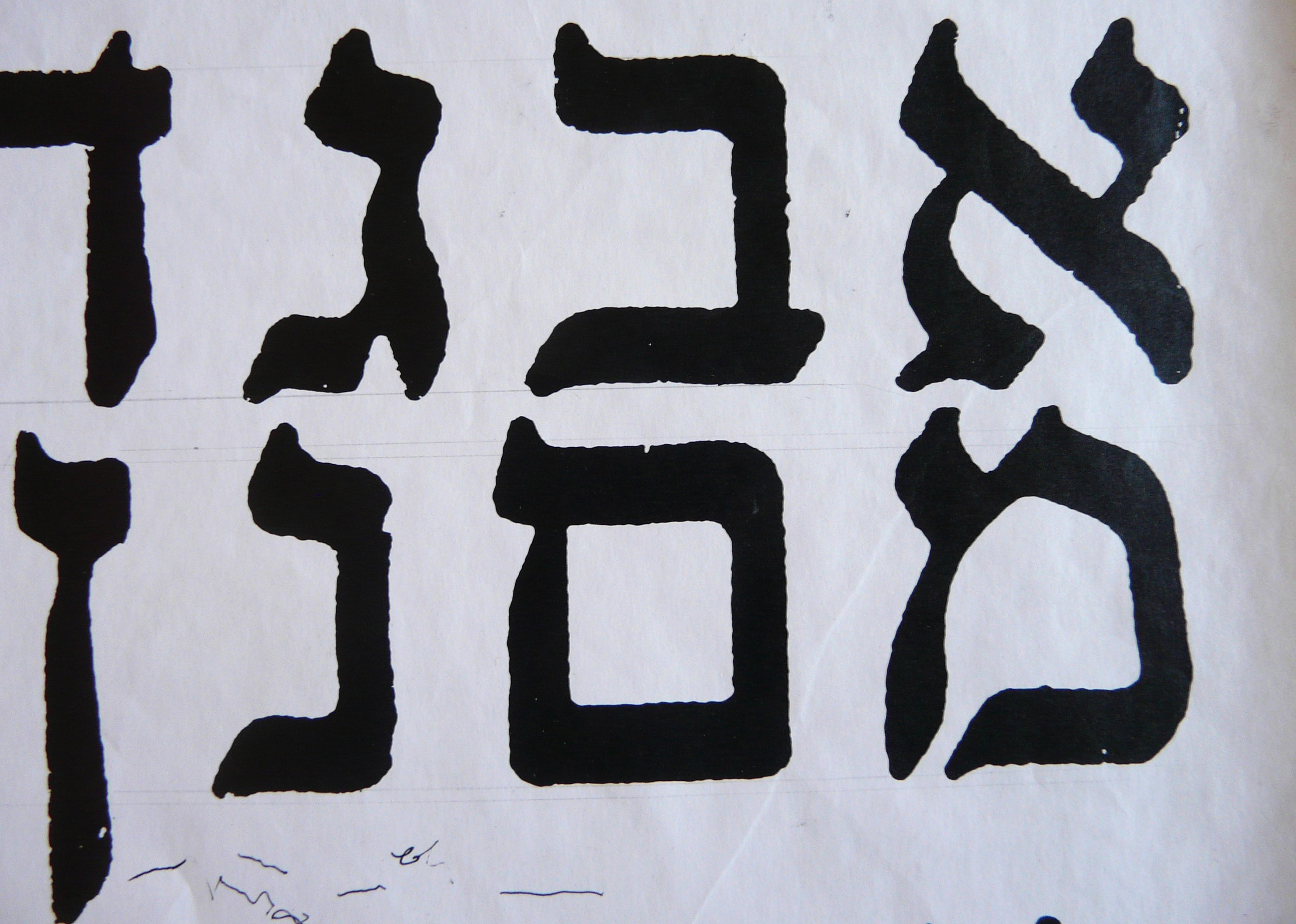 The results from corrected letter prints. 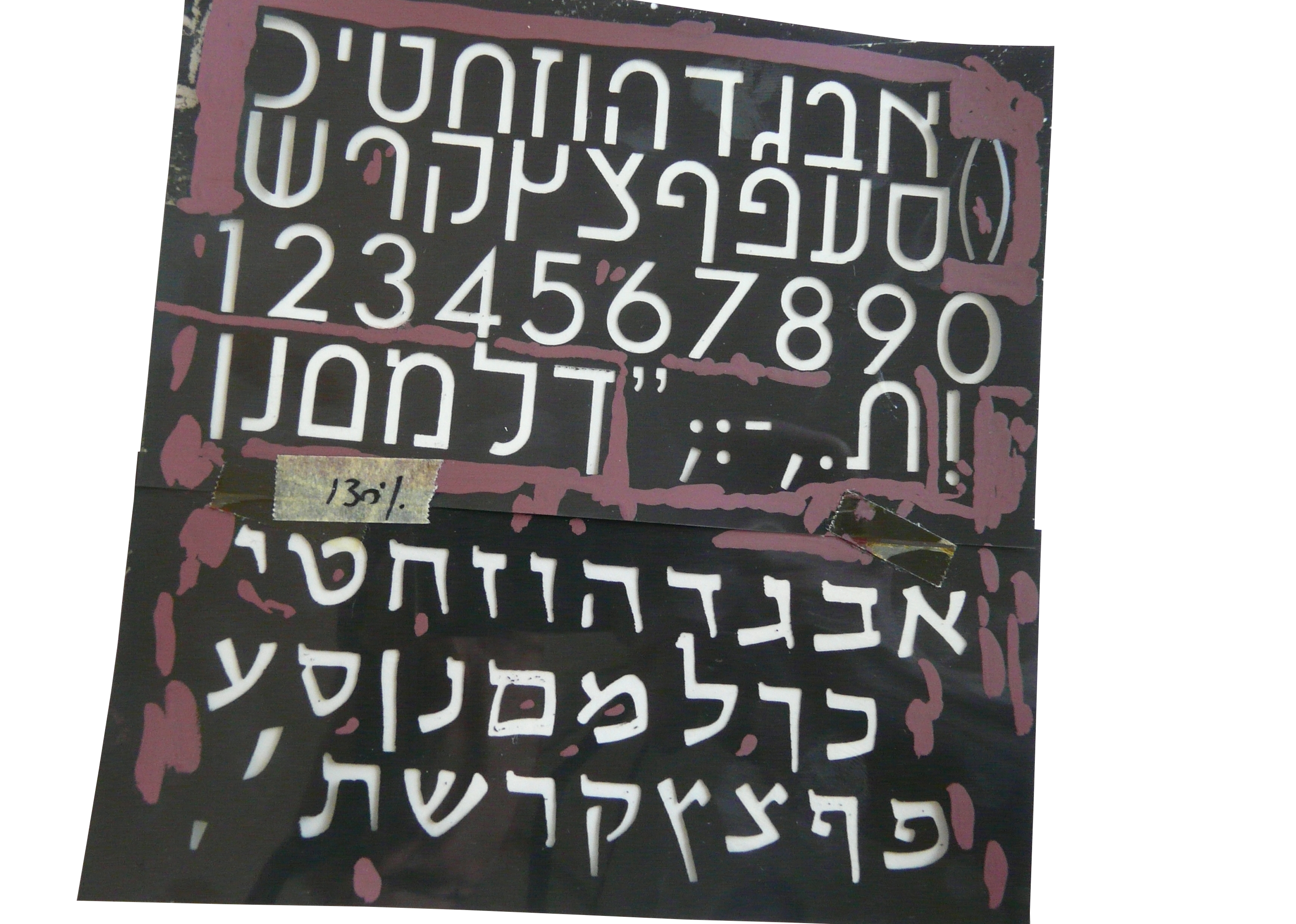 More original materials that Ilan Molcho shared with us. 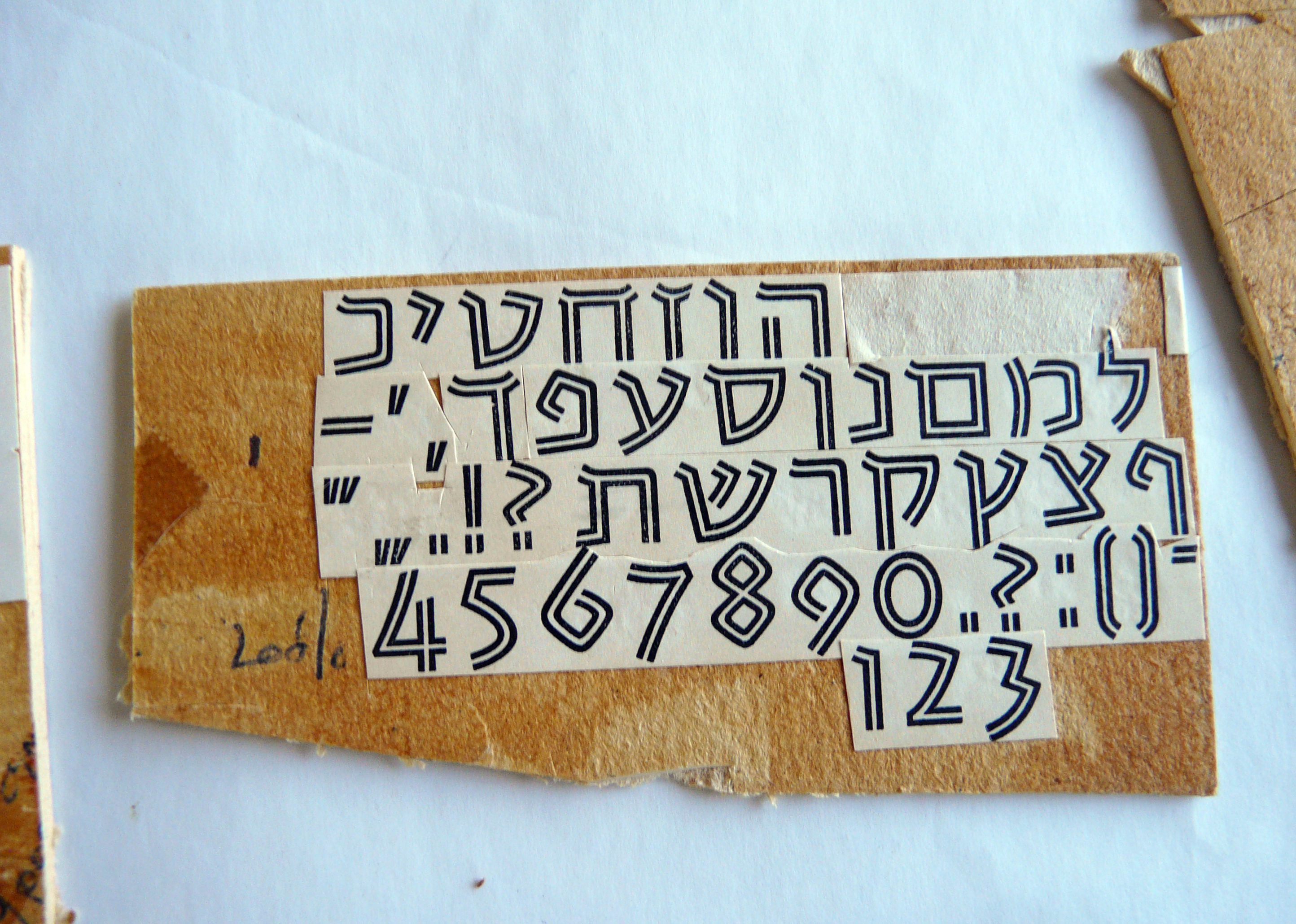 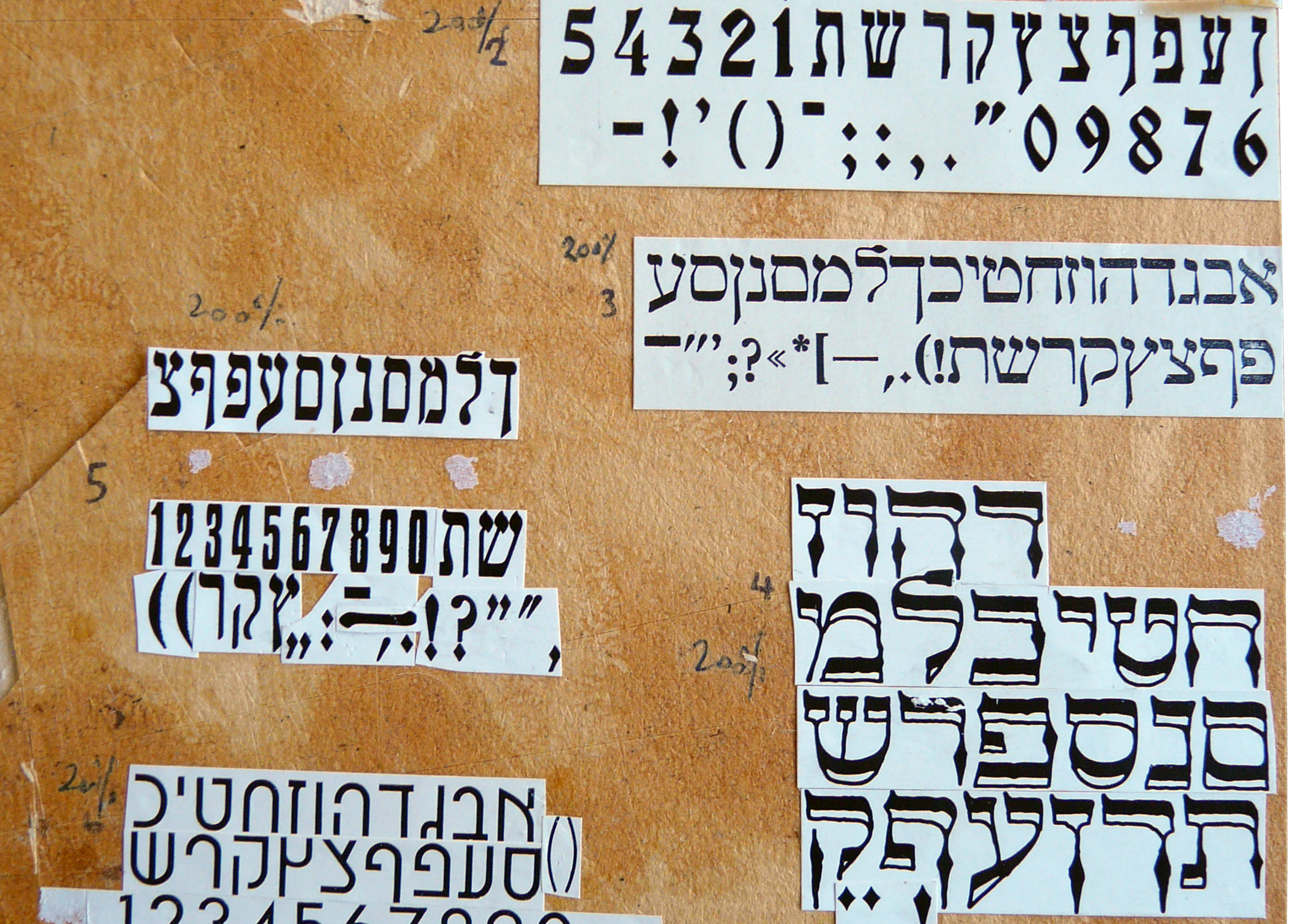 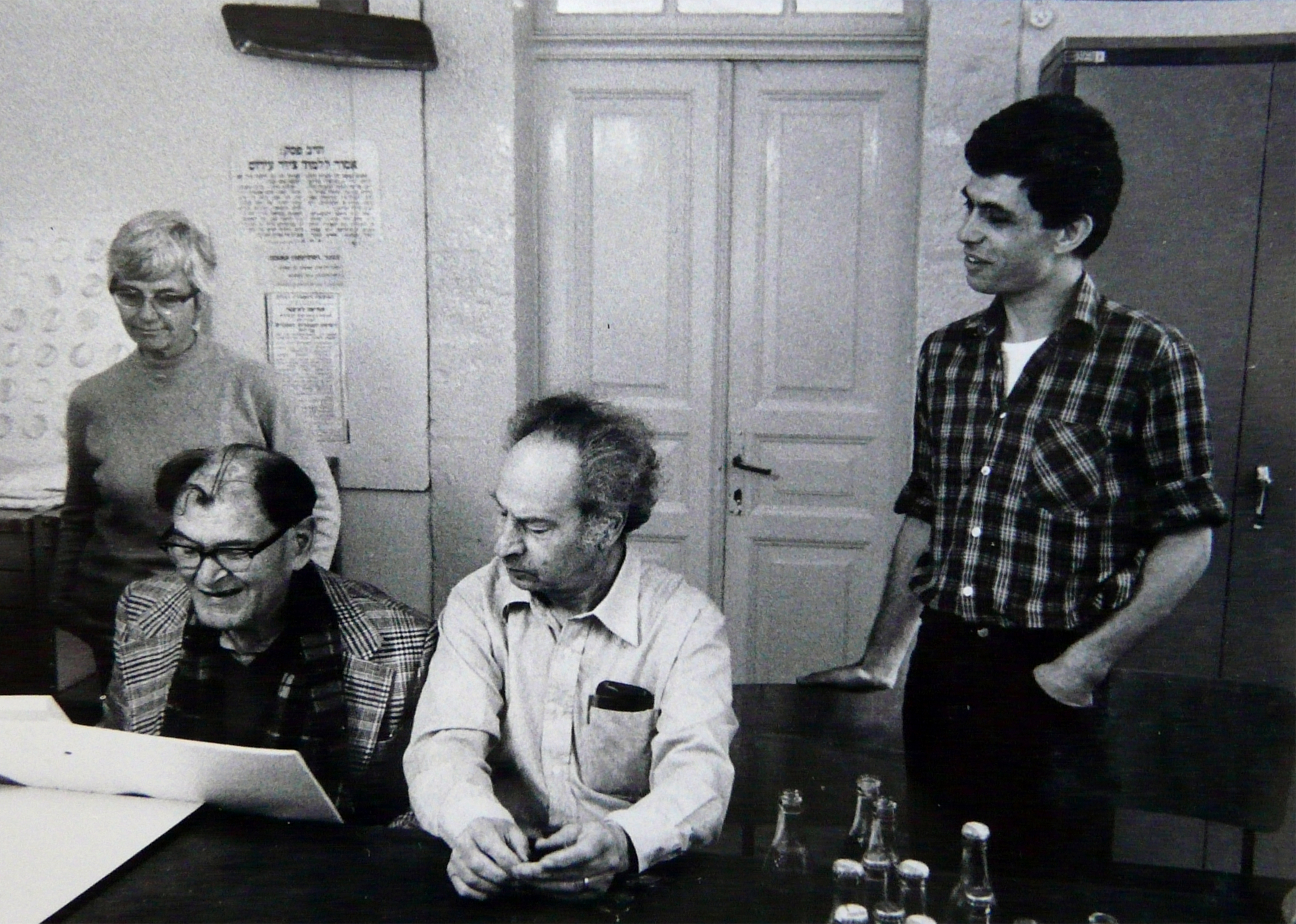 Prof. Avi Eisenstein (1946) taught typography for 45 years, from 1973 to 2018. Yanek and I were each his students, and if you have Israeli friends that are graphic designers, he probably taught them as well. For many years, Avi encouraged students to do crazy things with type. His approach was expressive, intuitive, and artistic.

His typography course was not only a framework for imparting knowledge but is a formative meeting between first-year students and the world of design. A small detail like a countershape, or even a surprising choice of a pushpin, could trigger rich, descriptive poetic monologues full of inspiration and imagination. In his presence, his language, his totality, and his passion for beauty, Avi demonstrated the essence of what being a designer means. 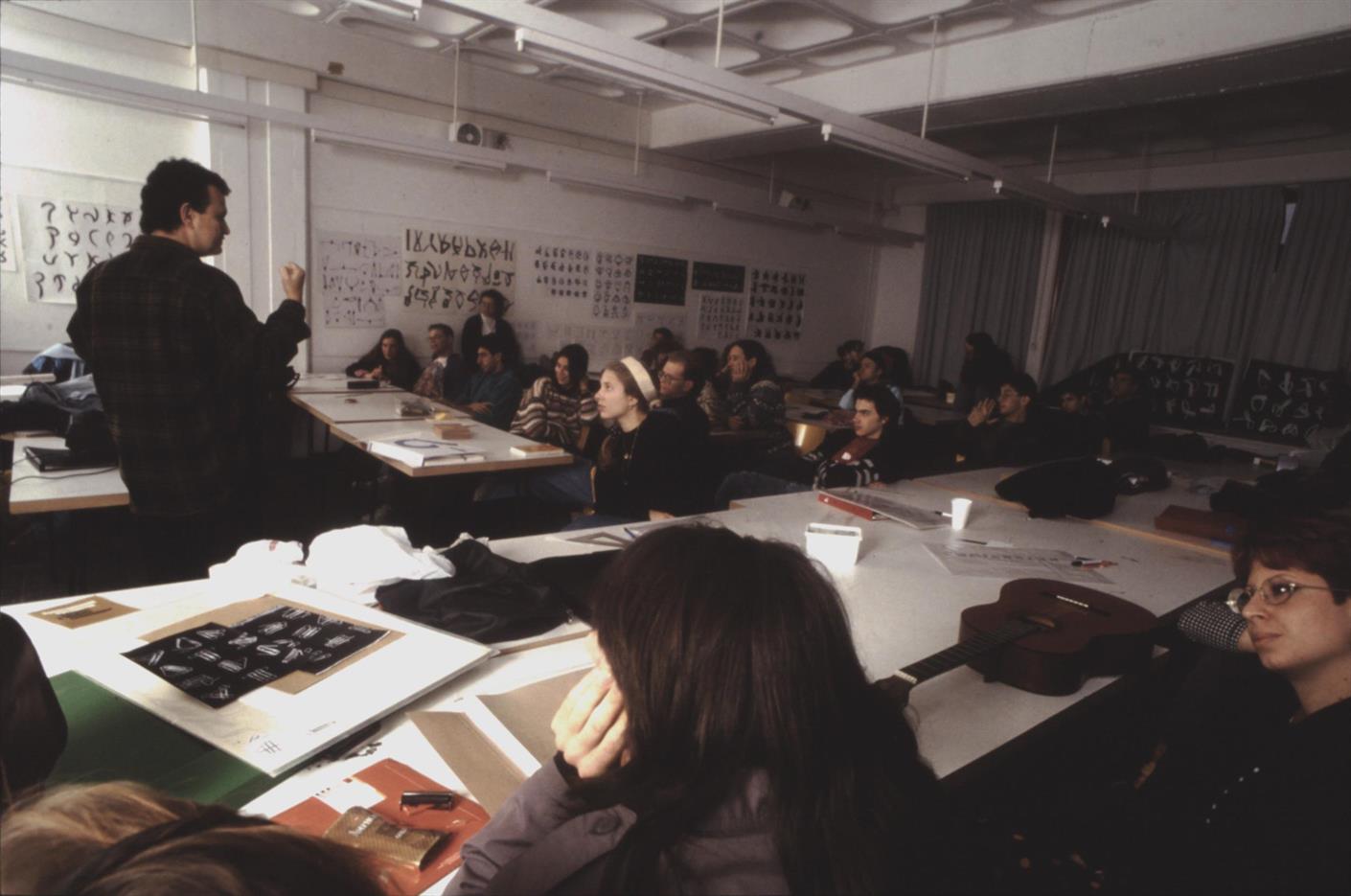 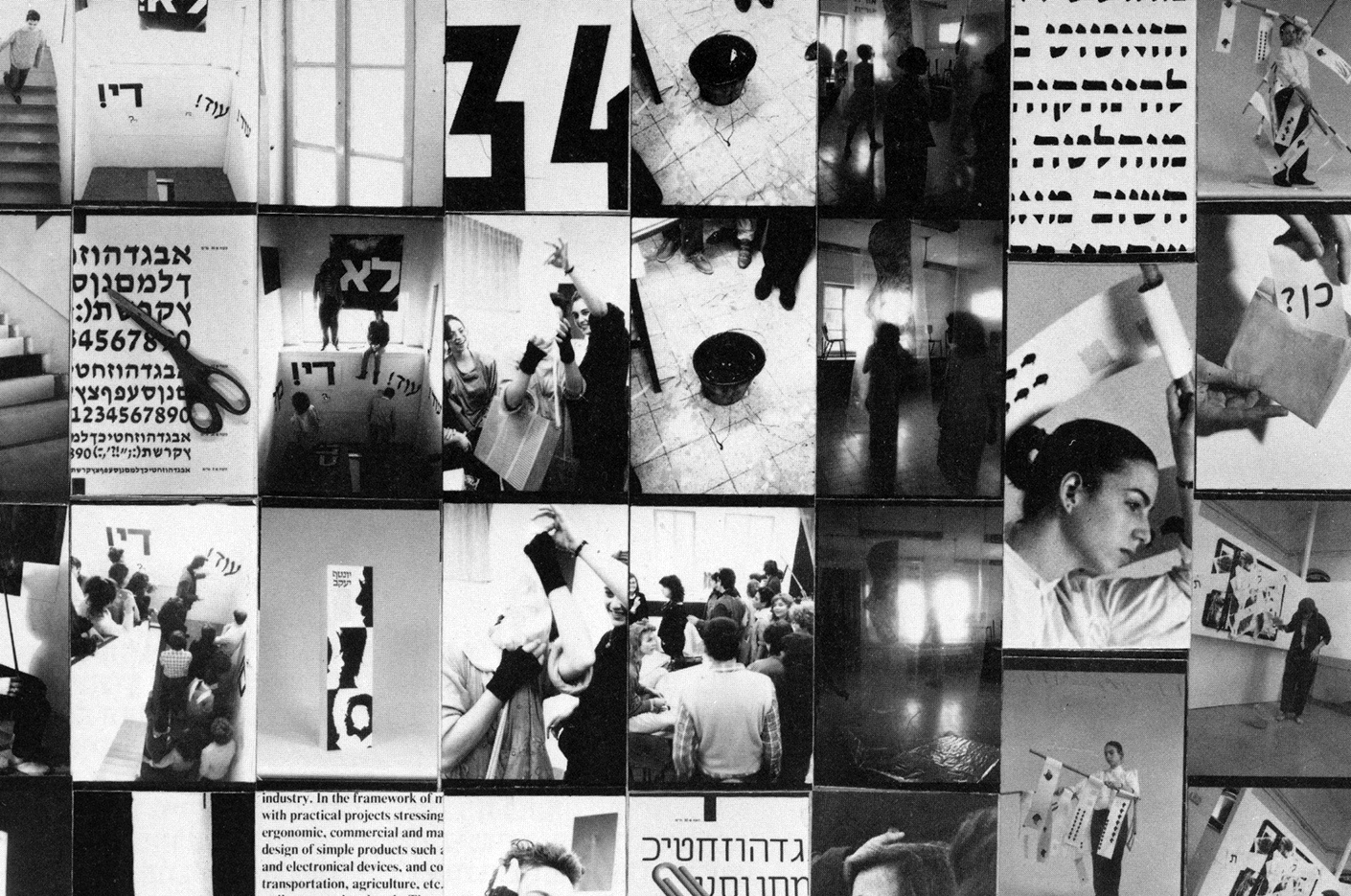 Collage of photographs made in Avi Eisenstein’s typography classes over the years.

The “Introduction to Typography” course for first-year design students is divided into two semesters. Each semester is 12 to 14 lessons (depending on holidays), and each lesson is three hours long. A classic lesson starts with all the students putting their assignments on the wall, and most of the teaching is done by giving critiques. Many assignments are drawn by hand and letters from the printed catalog.

The exercises in this article are taken from a book by Avi Eisenstein himself, called Basics in Typographic Design and Teaching Method, published by Bezalel Publishing 1986. 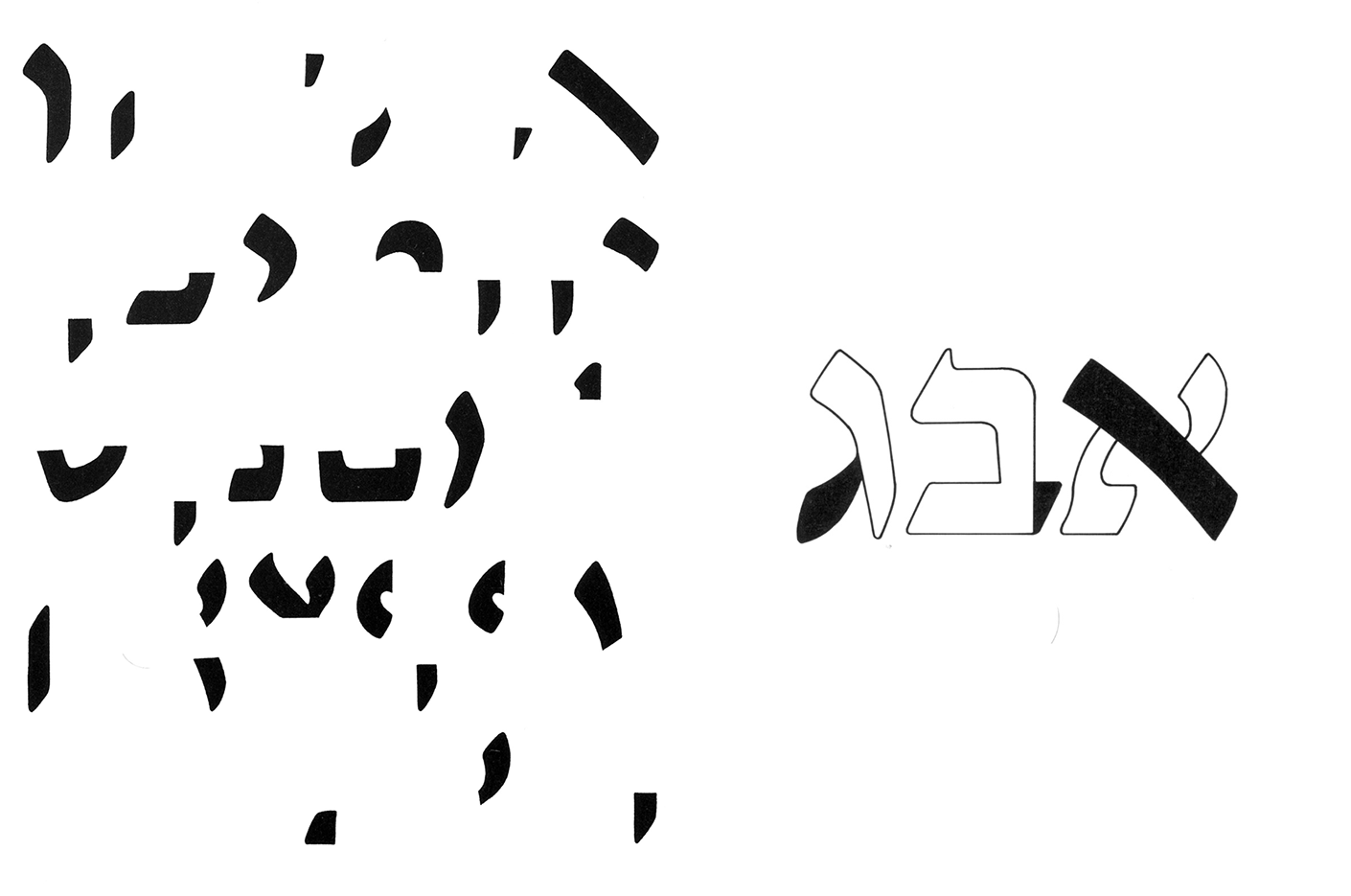 One of the first assignments he gave was to highlight unique details. This was done by hand, with tracing paper, on top of the pages from Ilan Molcho’s catalog. 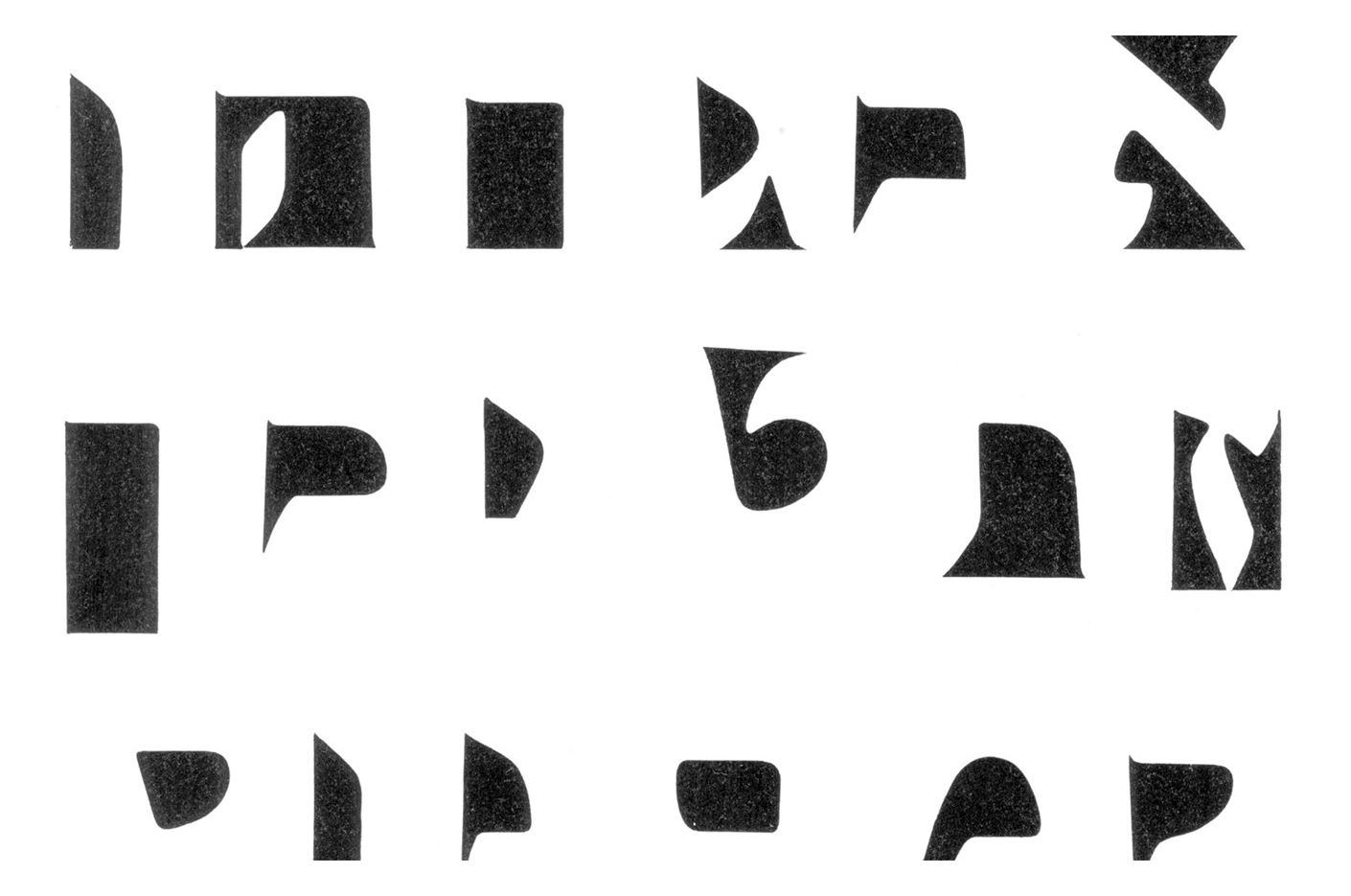 Another assignment was to draw the letters’ countershapes. 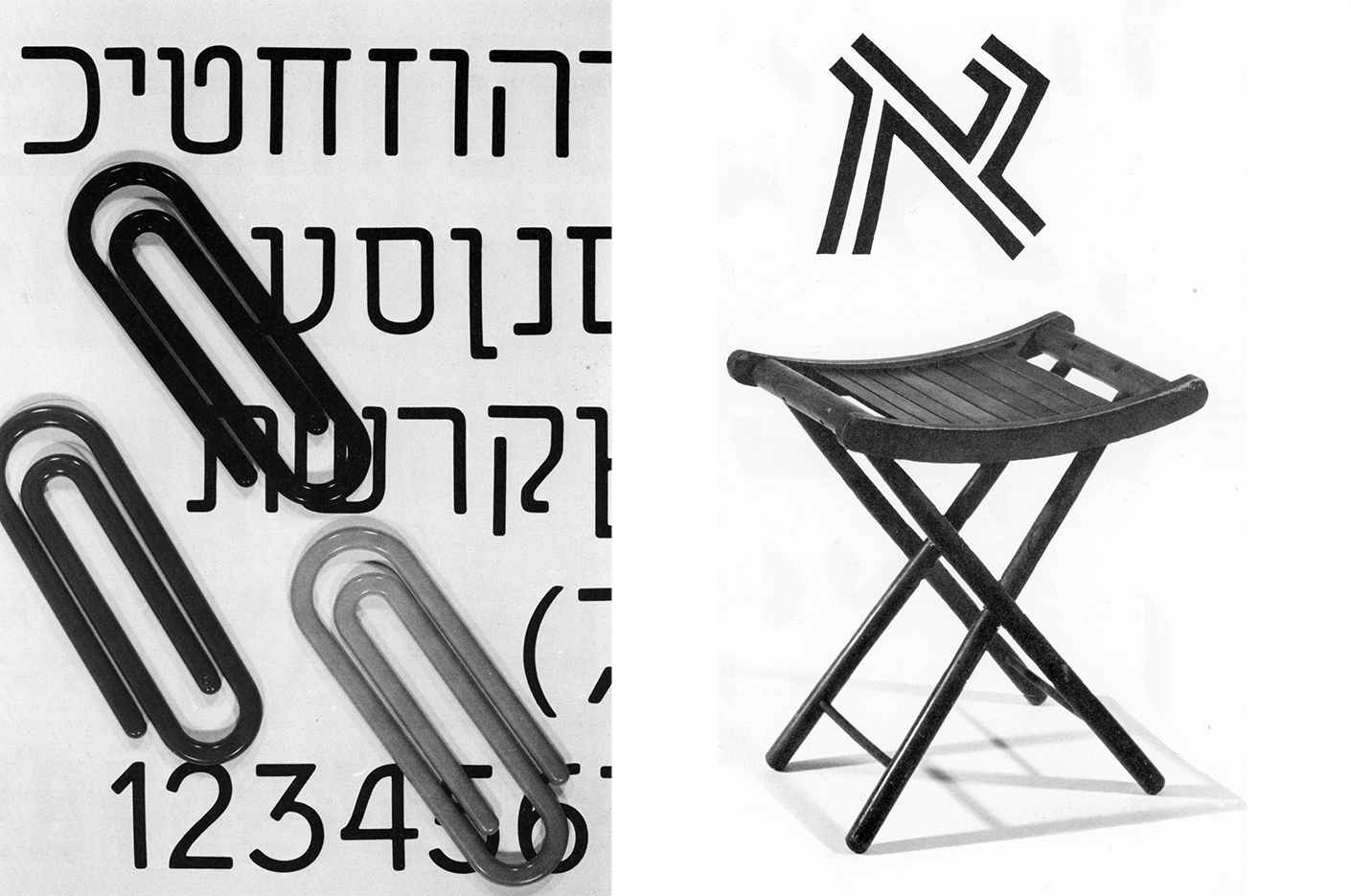 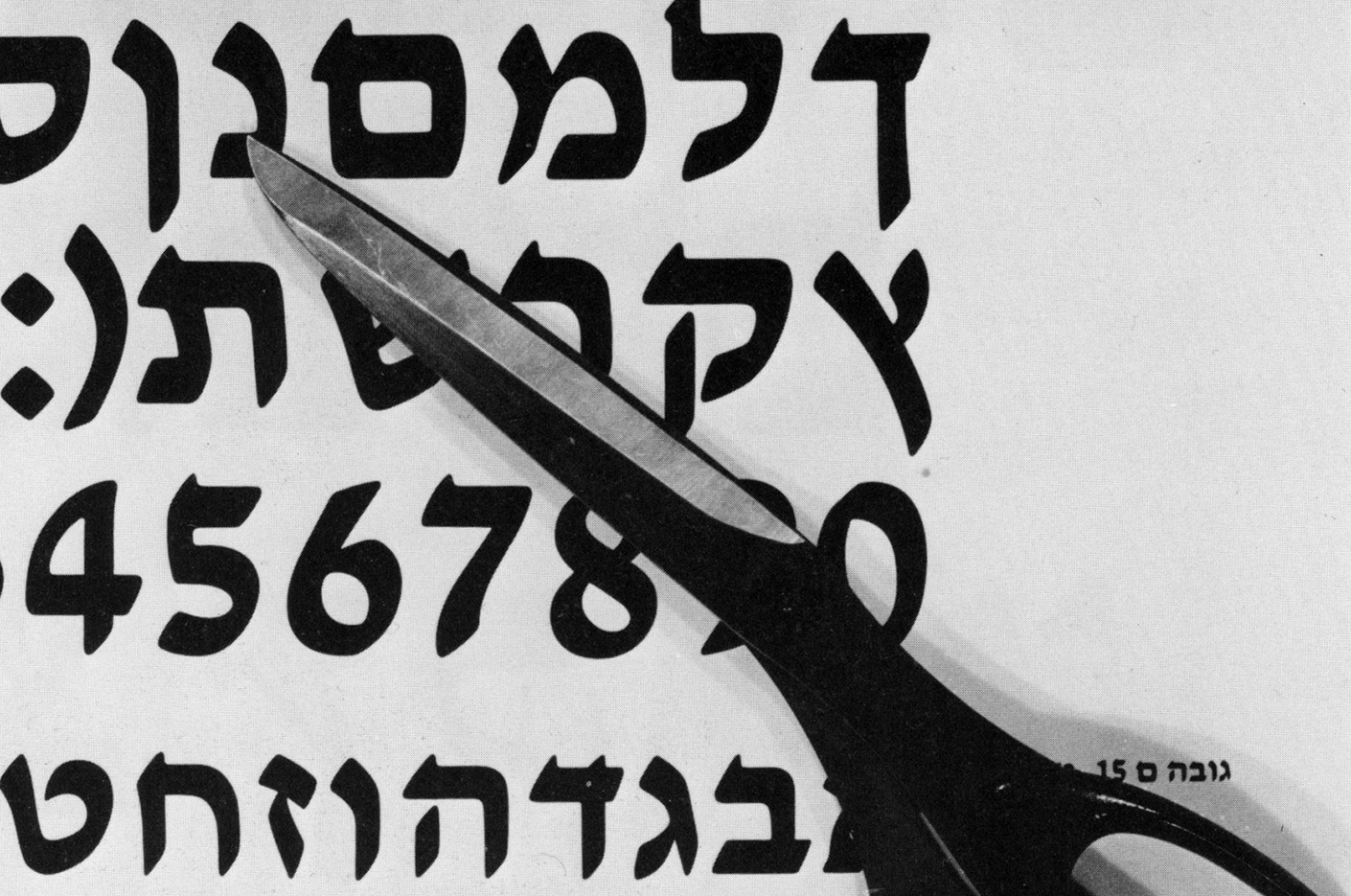 Another example of a ready-made object visually resembling a typeface. 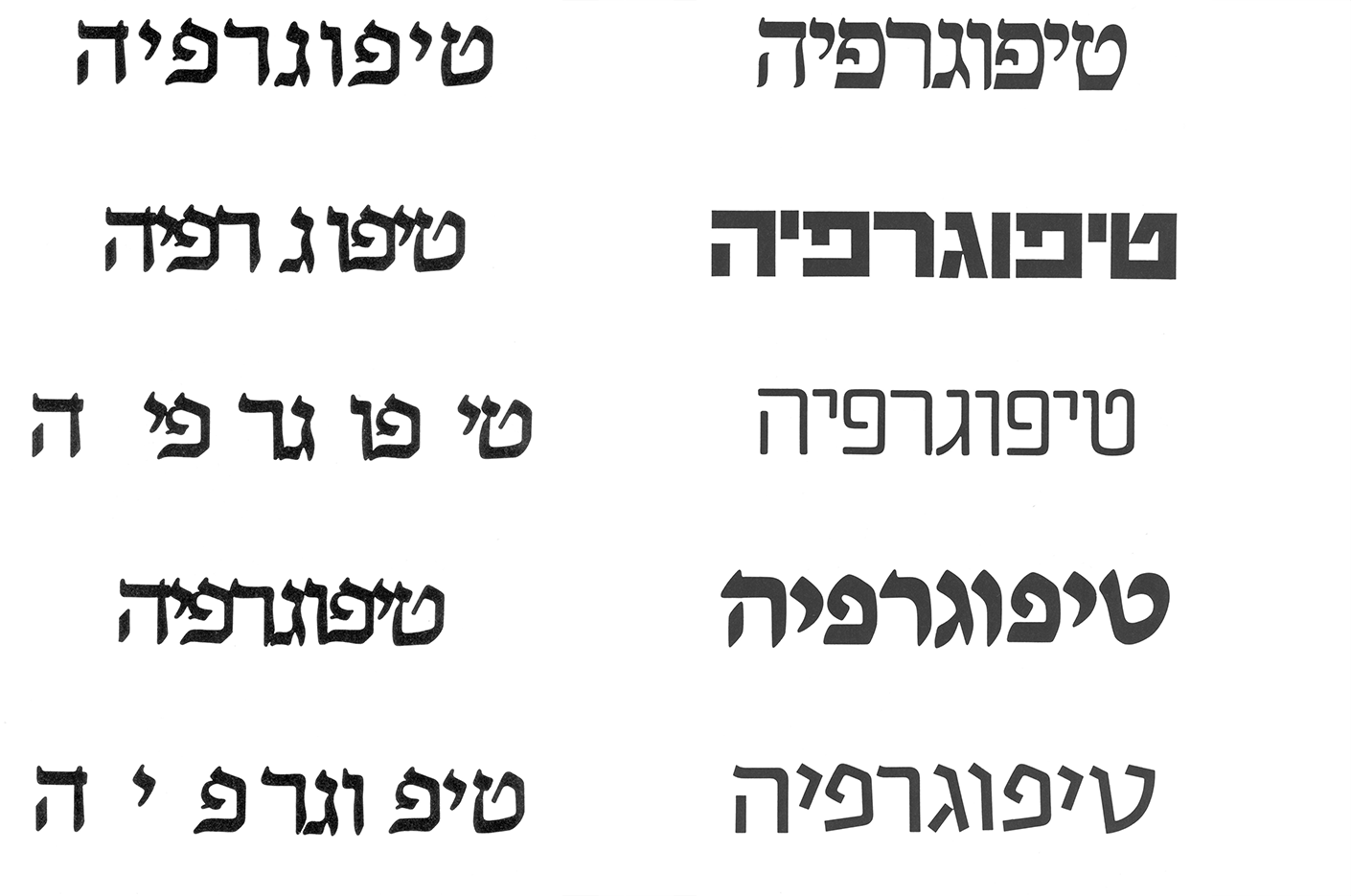 In the spacing assignment shown above, students had to define subjective and objective spacing, respectively. 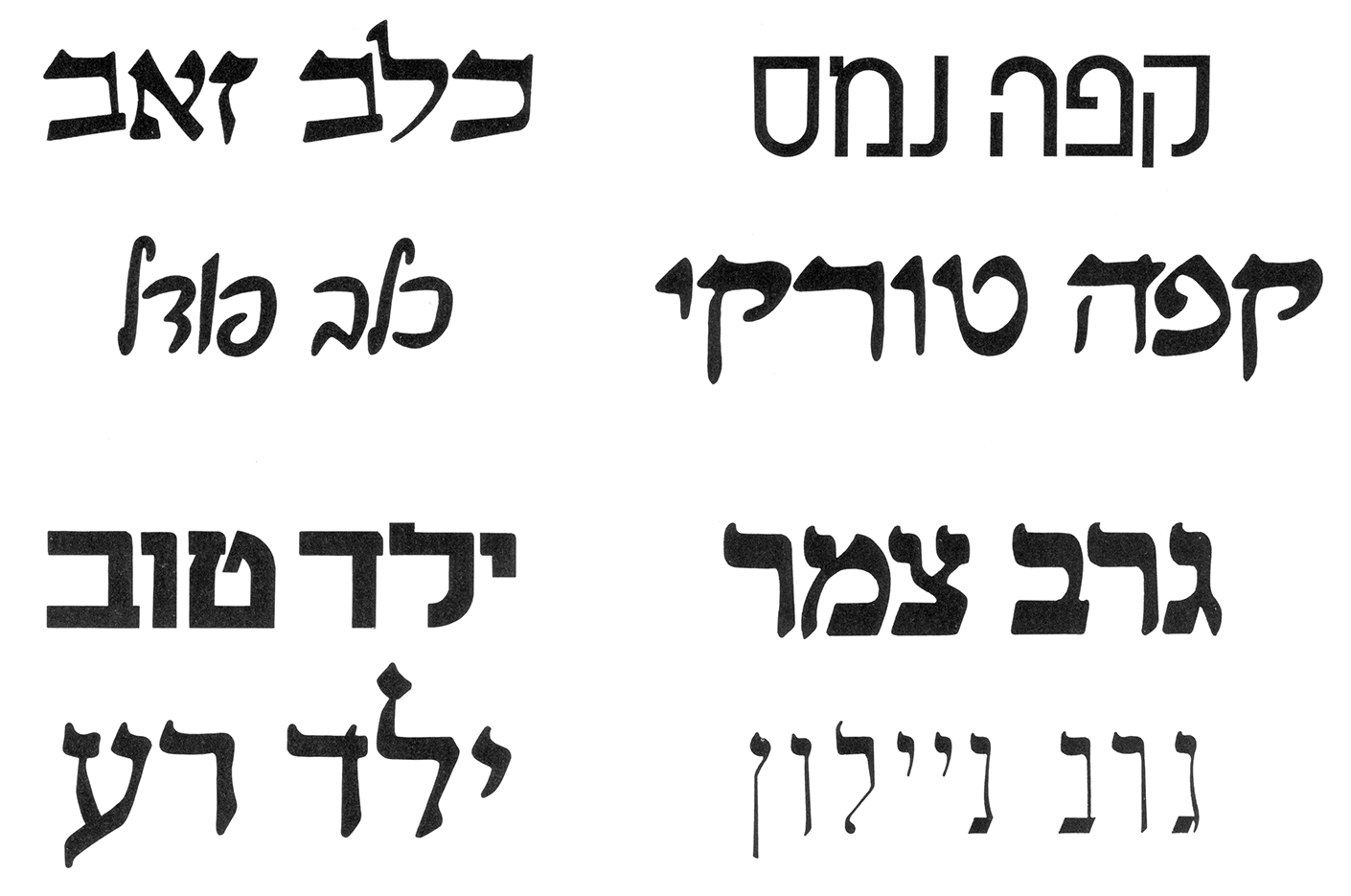 We practiced choosing various typefaces for different contents. The one on the top left is for a German Shepherd. Directly underneath that is for a Poodle. Below that are letters for the text “good boy” and “bad boy.” On the top right we have Nescafé and Black Coffee. The bottom right shows Wool Socks and Nylon Stockings. 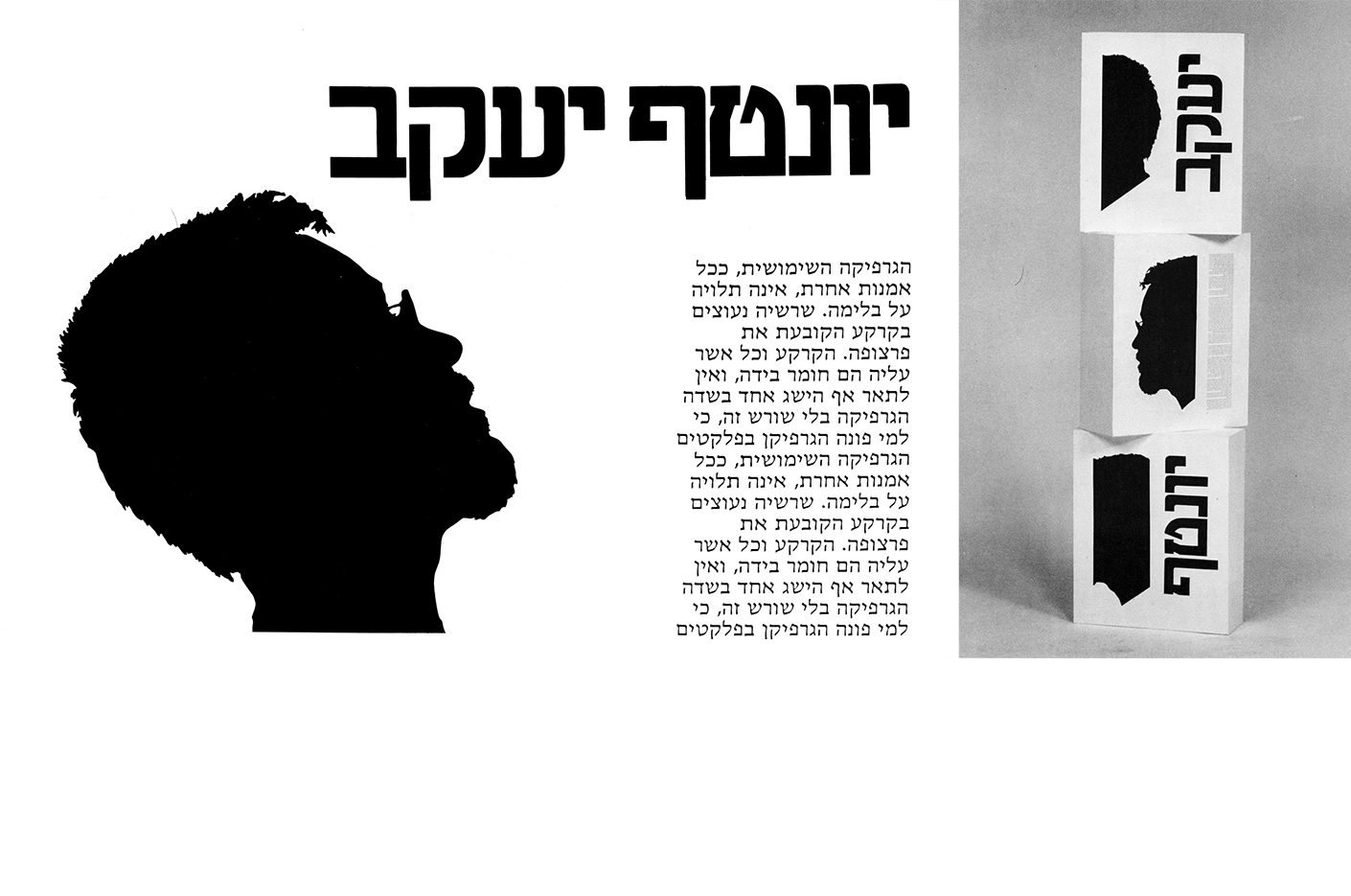 To close, here is a composition assignment, including set text, a headline, and an image. This sample was designed by Yanek, when he was a student, in 1985.

These iconic black-and-white assignments are passed from generation to generation. They were given to Bezalel students before I was born, I got them as a student, and now I give them to my students as well. It sometimes feels like I’m playing my own cover versions for songs I like that already have many different versions. In 2018, I joined the team of six lecturers that simultaneously teach this course to more than 120 students, divided into six different classes. Naturally, with new personnel comes new ideas.

In 2020 – exactly 40 years after the release of the original catalog shown at the beginning of this article – the academy issued a new edition of the type specimen. This time, it included digital font files. Michal Sahar, a well-known Israeli type and graphic designer, led this educational project. Together with her type-design students, Sahar created new digital versions of the catalog’s typefaces.

The new type specimen catalog bundled with digital fonts was a development made possible thanks to technology. It was especially necessary because most of the typefaces from the original catalog were no longer available in good digital versions.

From Tracing Papers to Calligraphy

Another recent change to the way we teach our typography students was the move from copying shapes with rapidograph pens and tracing paper to writing calligraphy. That is something that I helped introduce, and I was directly inspired by the type-design education I received at Type and Media, an MA program in The Hague.

When students write letters with a calligraphic writing tool (like the 3.8 mm Pilot Parallel Pen), they can better understand the origin of these shapes. That includes the distribution of typographic contrast, which elements are similar and which are unique, and how every little nuance affects the composition’s overall look.

For our calligraphy workshops, we use a typeface called David as a model, which was originally designed by Itamar David (1954). We chose this because it offers a good balance between traditional and contemporary hebrew. It is a classic but still neutral and not associated with religion.

The next development we are currently planning will be the addition of Arabic. In the past six years, the academy made beautiful efforts to open its doors to a wider variety of students from more areas of the country. In our presentation at the Fontstand Conference in September 2022, we shared the first draft of a work-in-progress Arabic catalog with seven Arabic typefaces. The current plan is that by the beginning of next year, our syllabus will also include Arabic typography materials. But this is going to be the subject of another article. Stay tuned!